Background and Objective: Ulcerative colitis is one of the inflammatory bowel diseases with unknown etiology. Studies done in different parts of the world showed that the sites of colonic involvement and epidemiology of this disease are varied. The aim of this study was to investigate the pattern of colonic involvement and epidemiologic charateristics of patient referred to Imam Khomeini hospital of Ahvaz during the years 2007-2011.
Subjects and Methods: In this retrospective study, the data from 98 patients, who referred to Imam Khomeini hospital during these 5 years with ulcerative colitis, which was confirmed by colonoscopy or pathology, were investigated and analyzed.
Results: Mean age of patients was 38.95±2.14 years, 42.8 % were in age group of 31-50 years and male to female ratio was 1.18. The most frequent site of colonic involvement was rectosigmoid (21.4 %) and pancolit (19.4 %). Although 52 % of patients had no co-existing disease, anemia was the most prevalent co-existing disease (16.3 %).
Conclusion: Based on the results of this study, the most frequent site of colonic involvement was rectosigmoid, and dominant sex pattern changed from female to male. 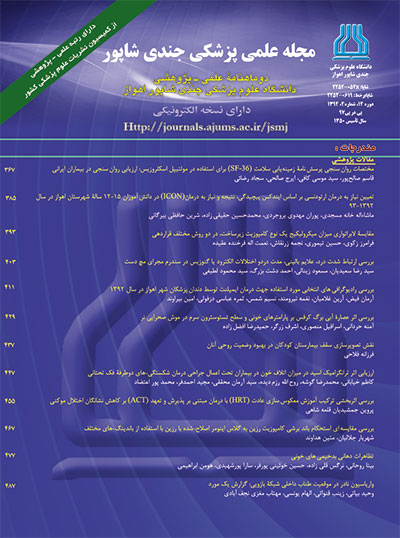